How to Find Wild Asparagus

Few wild edibles are as satisfying to forage as wild asparagus. It’s tasty, prolific, nutritious, and you can gather a huge bounty of it in just the few weeks of its season. Indeed, it grows so fast (many inches per day) that you can sometimes visit the same foraging spots twice a day and still keep harvesting new spears.
Wild asparagus is not technically any different from the asparagus in your garden or supermarket. It is simply asparagus that was once cultivated on old farms or homesteads and “escaped” to the ditches and countryside.
Asparagus grows in every state in the U.S., every province in Canada and parts of Mexico, though it is not found in all parts of every state. This map from the USDA will show you where it’s been identified in your state. Zoom in to see which counties in your area are known to have wild asparagus. My own county shows “none or unreported,” though, and we gather at quite a few sites here (over 60 pounds last year!). 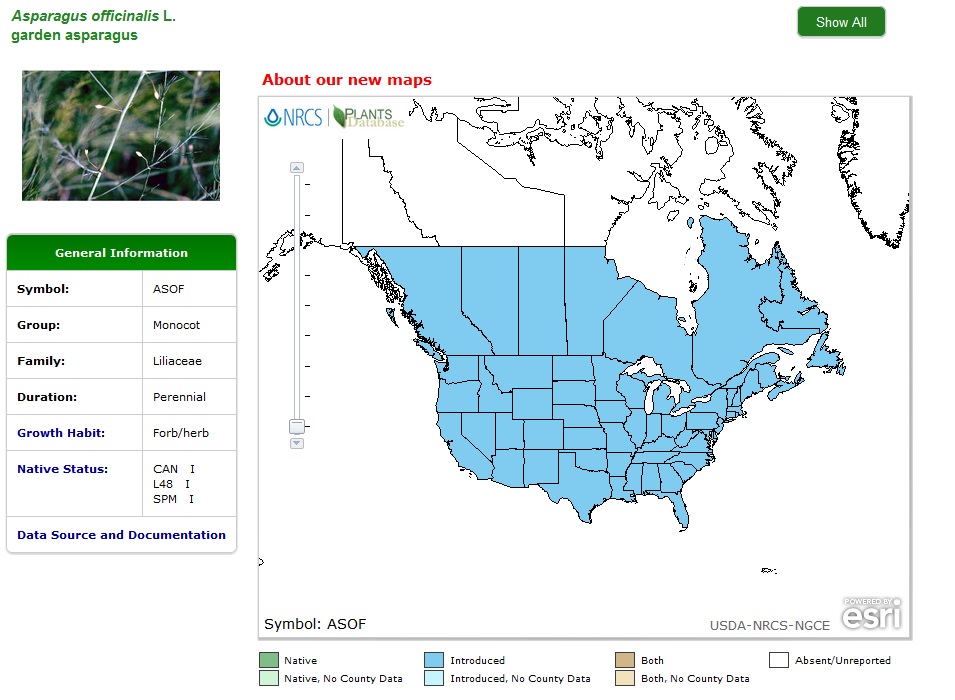 As prolific as wild asparagus is, it can be hard to find if you don’t know what you’re looking for. Luckily, there are easy ways to find it once you know the telltale signs.
Asparagus is most often found in sunny patches of land that are off the beaten path, particularly ditches. Even if the county mows them every so often, asparagus will happily grow for decades in ditches, especially in rural areas. It prefers some moisture but not too much. In drier areas, you may need to look for it near water sources like irrigation ditches, marshes, cattle ponds or streams. In most areas, it can happily find enough water to grow just about anywhere. It will often grow around fence lines where it escapes the tractor, mower and most people. Of course, it goes without saying that you should only harvest on public land or where you have permission. 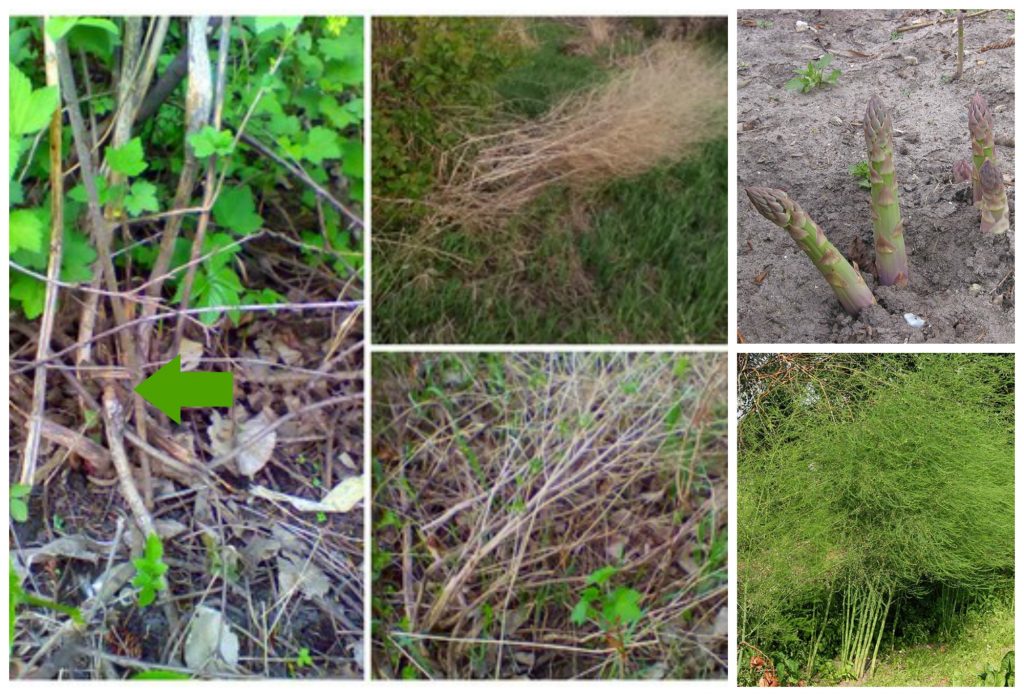 Good asparagus spots are easiest to find in late summer when they’re in their telltale “Christmas tree” stage of huge, bright green feathery stalks (see the collage above). Later in the season the clusters will be bright yellow and you’ll notice them in ditches everywhere. If you see those during the year, mark the spot for next spring. Those gold mines of asparagus foraging may be nearly impossible to spot when it’s time to harvest the new crop of asparagus, especially if the ditches have been mowed by springtime.
That said, you can still find asparagus in the spring if you know to look for the dead clusters of stalks from last year (again, see the photo collage above). Unless they’re caught in another plant, the tops are so heavy that the dried plant typically falls over to one side. Look in ditches and near old farm properties for the thick dried stems with the feathery tops leaning in the same direction.
Try to find these signs of prospective patches well before foraging season, so you have lots of sites to forage once the spears emerge.
Wild asparagus season varies by location. It tends to be around late April and early May here in Minnesota, but much earlier in warmer parts of the country and even later in parts of Canada. Look for other signs to start checking asparagus spots, such as seeing asparagus coming up in your garden (or neighbor’s garden) or when the lilac trees start budding.
Once you know that it’s coming up in your area, start walking your sites. Bring a container (such as an ice cream bucket or plastic grocery bag) and a small, sharp foraging knife. Be sure to dress protectively against ticks, which are often abundant in the same locations as asparagus.
You’ll often find new asparagus poking up several feet from the original plant. The new asparagus may not be growing directly from the old stems (although if you look closely at the collage, the arrow is pointing to several spears emerging in the center of last year’s dead stalks and other plants). They may be growing anywhere within a foot of the dried stalks, if they are coming up from seed.
If you see any dried stalks at all, it’s a good idea to do a very slow search of all of the surrounding ground. Check near the base of the old plant first but walk slowly and scan the ground in the entire area. Where you find signs of wild asparagus, you can almost always find fresh asparagus somewhere nearby.
Kids are great companions for asparagus harvesting. They tend to have good eyes and enjoy the hunt. It’s also a great skill to pass on, along with a good way to spend time together in nature.
Asparagus will often send up one thin early stalk, and this can be good to look for. If you spot one of these, it’s a great sign that a lot more is coming. There also may be other plants nearby that have already started producing the typical, shorter spears.
Scan the ground slowly and well. Looking for asparagus in a new spot is similar to looking for morels. It helps to move slowly and methodically and really let your eyes linger on all the ground around you. This is another area where children are great to bring along, as some are especially adept at finding asparagus in the same spot you swore you just searched thoroughly.
If there are certain signs that a lot of asparagus grew in that spot last year but you cannot find any signs of any new growth, there are two most plausible possibilities:
In either case, keep checking the same spots every couple of days to see if you can spot new growth. It’s a safe bet that if lots of asparagus was there last year, there will be lots this year, too.
If you do locate asparagus, cut it with a sharp knife just below the soil. Harvest spears that are at least six inches long (shorter ones will generally be tall enough to harvest by tomorrow). You can harvest repeatedly from the same plant and it will keep sending up more spears, but be certain to leave lots of stalks at the end of the season so you do not damage or kill the plant. Once the spears are about as wide as pencils, stop harvesting so that the plant can store energy for growth the following year.
The season should continue about a month, especially if you have several sites that you’re harvesting. If you’d like to preserve some of the bounty, blanching and flash freezing is the best way to keep the color, texture and nutrition. For blanching asparagus, I recommend cutting the stems in two inch pieces and dropping them in the boiling water for two minutes first, then adding the heads for just one minute more before moving it all to an ice water bath and flash freezing (spread on a cookie sheet in a single layer until frozen, then scoop into freezer bags).  If you want to freeze entire spears, drop them in boiling water for 2-3 minutes and then quickly remove to an ice water bath and then flash freeze.

2 thoughts on “How to Find Wild Asparagus”