Review: How to Instant Pot

I was able to read an advanced reader copy of the upcoming book, How to Instant Pot, recently and 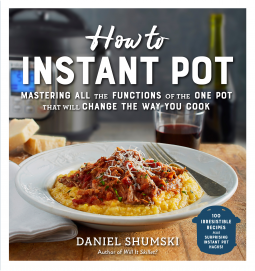 thought I’d share my review here in case it helps any readers.

How to Instant Pot might be better named “The Meat Lover’s Instant Pot Cookbook,” as meat features quite predominantly.  As someone who cooks vegetarian, this meant the vast majority of the recipes were of no use to me.  I’m sure they’ll be great for typical omnivores, but I thought I’d mention it first as a heads up to vegetarians, vegans and even those who try to cook a lot of meatless recipes for health or economic reasons.

Most of the recipes are for meat, meat, meat.  Even the recipes for vegetables involved adding a lot of meat.  I got to the point where I was surprised the oatmeal didn’t call for some sort of meat added to it, as even the tofu soup called for bacon and chicken stock (and fried eggs on top).

This also isn’t the best cookbook if you are trying to limit your fat or calorie intake.  The dishes include copious amounts of cream, cheese, meat and fat.  Likewise, the recipes are not going to be the easiest on your pocketbook since they call for lots of meat and lots of specialty cheeses.

I use my Instant Pot fairly often, but generally just for a few common things — black beans for Mexican night, spaghetti squash, artichokes, quick potatoes, millet, quinoa, lentils, etc.  My manual is pretty worthless for looking up the times and instructions for this kind of thing and I really wanted a general “how-to Instant Pot book” (which is what this is named) rather than a cookbook.  I would love a big book of instructions for how to cook basics like these and then a few good recipes for each one of those.  Instead, this is a cookbook of mostly meat dishes you can pressure cook and then mostly soups and stews (again, mostly meat based) you can make on the slow cooker setting, and so on.  Perhaps I’ll write my own.  🙂

There are lots of color photos (though not every recipe has a photo) and there’s very good information about the basics of how Instant Pots work, though.  The author writes in a very accessible, friendly style.and strikes a great balance between being knowledgeable and down-to-earth.  He just doesn’t happen to cook the same types of foods that I was hoping to find instructions or recipes for. If you like cooking with lots of meat, half and half, specialty cheeses, etc. then this is likely to be a book you’ll enjoy quite a bit.  It is also fairly suitable for gluten free folks, as very few recipes call for wheat or bread (though there are some).

How to Instant Pot is due to be released on October 31.  You can find it here on Amazon or at local book sellers.