The Fascinating History of Racahout, an Acorn Delicacy and Health Remedy — and the Modern Knock-Off It Inspired

As many readers know, I have been writing an acorn foraging guide and cookbook.  My research led to a fascinating bit of history this week when I stumbled upon a reference to Racahout des Arabes, which was apparently once a very popular hot drink or hot cereal (depending on how much hot milk you used) made from acorn flour, sugar and thickeners. 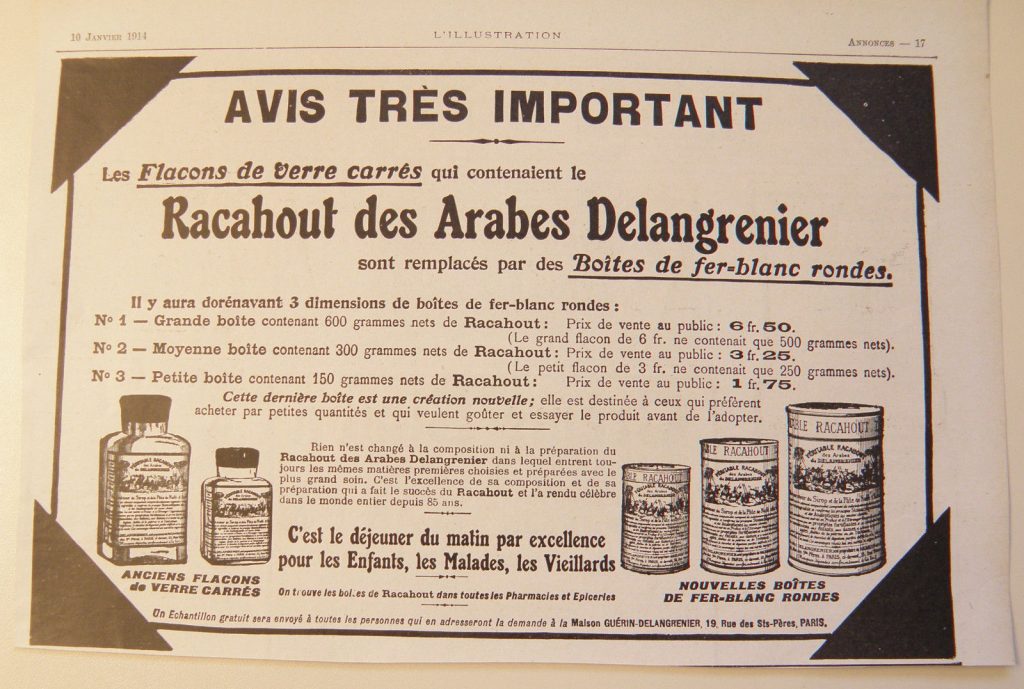 This led to a bit of internet digging, which led me to a fun blog called The Old Foodie.  The author there wrote:

Sometimes a historic trail leads off to somewhere quite different from where you start – which is a large part of the fun of course. I was exploring the use of acorns as food (boiled, in bread, as subsitute coffee), and found myself browsing an interesting bookcalled Waste Products and Undeveloped Substances, or, Hints for Enterprise in Neglected Fields, published by Peter Lund Simmonds in 1862. He describes the historic use of the acorn, and then says:

“ … In Turkey acorns are buried for some time in the earth by which the bitterness is destroyed They are then dried and toasted. Their powder with sugar and aromatics constitutes the palamoud of the Turks and racahout of the Arabs an alimentary substance readily digestible and very much esteemed.”

Apparently, Racahout des Arabes was a very popular delicacy that was also considered to be quite healthful.  It was often recommended for young children and invalids. Depending on how much hot milk or water was added, it could be a hot drink or a hot cereal (like our modern cream of wheat but more flavorful). 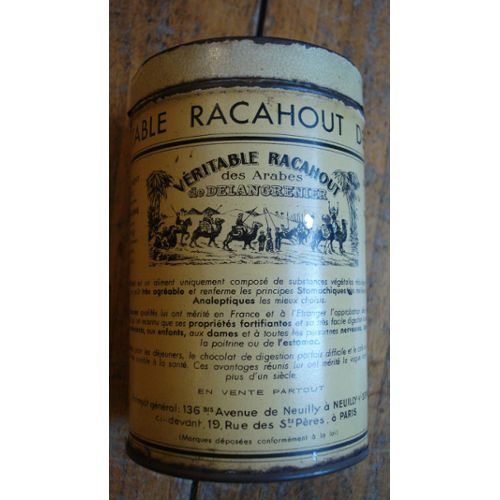 Interestingly, I had already developed a recipe for a hot cereal with acorn meal, which my oldest daughter and her fiance (that day’s lucky test subjects) had really loved.

I had developed it because I knew how well acorn meal thickened like corn meal (think polenta) and thought that a hot cereal would really show off the sweet, nutty flavors of acorns.

I really wanted to know more about racahout and kept digging.  I found yet another reference in yet another old book, The Epicurean, from 1893. 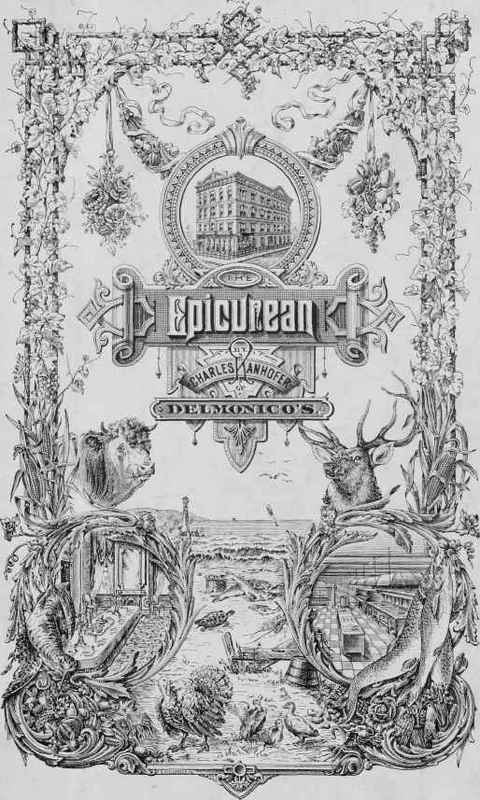 Again, this made use of a purchased racahout mixture.  It also included a recipe for racahout cream, basically an ice cream (I have two recipes for acorn ice cream in the book too, incidentally — one vegan and one traditional).

Put a pint of milk into either a silver or tin saucepan. Place in a bowl two level spoonfuls of racahout, then four or five spoonfuls of cold milk; dissolve the racahout and pour it into the boiling milk; let cook for four or five minutes, stirring all the while, sweeten to taste and serve. It can also be prepared with water instead of milk.

Put six egg-yolks into a basin with two heaping tablespoonfuls of racahout and ten ounces of sugar; beat well with a whip, adding one quart of boiling milk; cook this cream until it almost boils, without allowing it to do so, then strain, cool and freeze, mixing in half as much whipped cream (No. 50). Pack two molds in ice; having covers to fasten on the outside; one cylindrical, five and a half inches in diameter and six inches high, and the other dome-shaped, four and a half inches in diameter at its base. Pour some maraschino over macaroons; place them in layers in the cylindrical mold, then racahout cream to cover, on this the fruits and more of the cream and then macaroons (No. 3379), continuing until the mold is entirely full, finishing with the cream; fit on the cover, freeze for one hour, then unmold it into the above wafer timbale; lay this timbale on a folded napkin, put on to it first the wafer ring and then the dome cover and serve.

I found so many references to this well-loved product of the past. 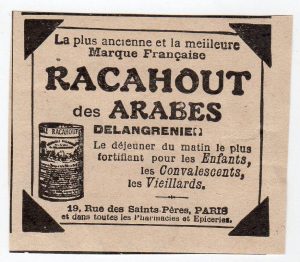 There’s even a pillow for sale at Walmart showing a vintage poster for Racahout des Arabes (don’t buy it, it’s way overpriced). 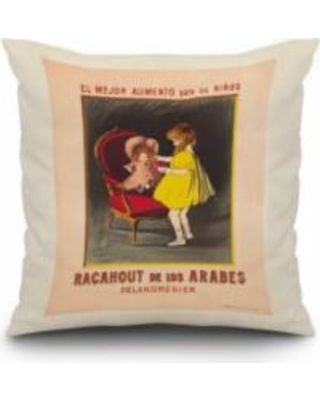 And this Got Racahout? water bottle that I find strangely tempting.  😉 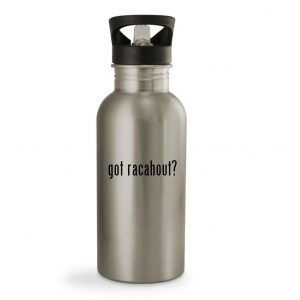 Then I found another old book that had been archived, The Druggist’s General Receipt Book, and found something even more interesting. Apparently, everybody loved racahout but modern folks weren’t willing to process their own acorns and there was an industry that decided to capitalize on its popularity — the newly emerging cocoa industry.

According to the French cullinary blog Cuisine maison, d’autrefois, comme grand-mere, in 1854, a pharmacist’s advertisement claimed that only the true Racahout des Arabes was patented by the government and approved by the Royal Academy of Medicine and the professors of the faculty of Paris.  But this Racahout des Arabes did not contain any acorn flour.  Instead, they substituted cocoa, which they had been selling as a health remedy and wanted to further promote.  The site says:

Fashionable in France by Anne of Austria during the reign of Louis XIII, it became a health product under the influence of a chocolate-apothecary, Sulpice Debauve. This supplier of King Louis XVIII, then Charles X, is the inventor of analeptic chocolate, prepared at the salep of Persia. About this chocolate of health, one can read, at that time in Le Figaro: “Chocolate was in France, thirty years ago, only the breakfast of the old people, it is analeptic Chocolate to the salep of Persia of the invention of M. Debauve, is both light and nutritious, and is suited to weak constitutions, delicate breasts, persons attacked by chronic diseases and nervous affections of the stomach.” (translated)

By the early twentieth century, Racahout des Arabes had been successfully transformed into a chocolate product — and it was still being promoted as a health food.

In the 1905 medical book DIETETICS FOR NURSES, the authors (both medical doctors) wrote:

Racahout des Arabes.— This is a French preparation with a chocolate flavor which makes a most delicious gruel. Follow the directions given for farina gruel.

Modern sites say that acorns were used in racahout as a substitute for chocolate, but that actually seems to be backwards if you go to the actual old texts.  Acorns were the traditional ingredients for Racahout des Arabes, and cocoa was the substitute used in commercial mixes, especially after the influence of the newly powerful cocoa industry in France.

Eventually, it became much more popular to prepare Racahout des Arabes as a hot beverage instead of a “gruel” (it’s pretty easy to understand why!).

The Druggist’s General Receipt Book offered a recipe for imitation racahout using cocoa.  To make up that mix, you combined cocoa, arrowroot powder, sugar and a drop of vanilla.  Then you’d add it to hot milk.

Later, people dropped the racahout name but a variation of that easy beverage mix remained popular.

It is now known as hot chocolate mix. 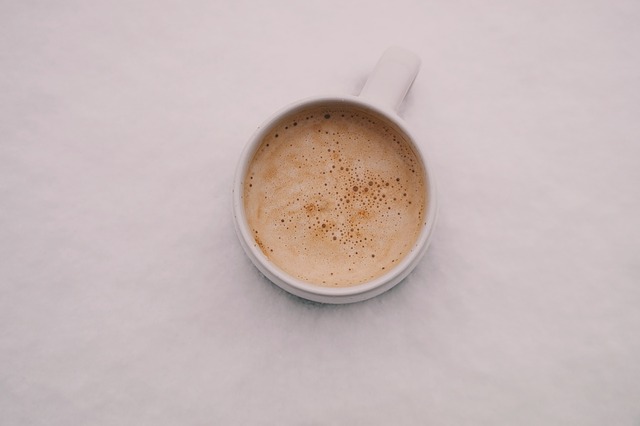 And now you know the rest of the story.  😉

(And yes, of course I am working on a modern recipe for Racahout des Arabes mix with its original acorn flour.)

1 thought on “The Fascinating History of Racahout, an Acorn Delicacy and Health Remedy — and the Modern Knock-Off It Inspired”