How to Make Dandelion Syrup

Daryl has made dandelion syrup several times with our kids and it’s always a big hit.  Not only is it fun, but the syrup tastes delicious and it’s full of vitamins from the dandelions.  It’s also a great vegan substitute for honey, with a similar color and taste.

Although it’s the dead of winter right now here in Minnesota, I just realized that Daryl’s recipe is no longer online anywhere, so I’m putting it here for when the dandelions are blooming in a few months.

Here are his instructions from the first and second time he made it, with his notes.  I know he has pictures of all of the steps on his old computer from his original directions, so I’ll see if he can add those soon, too. 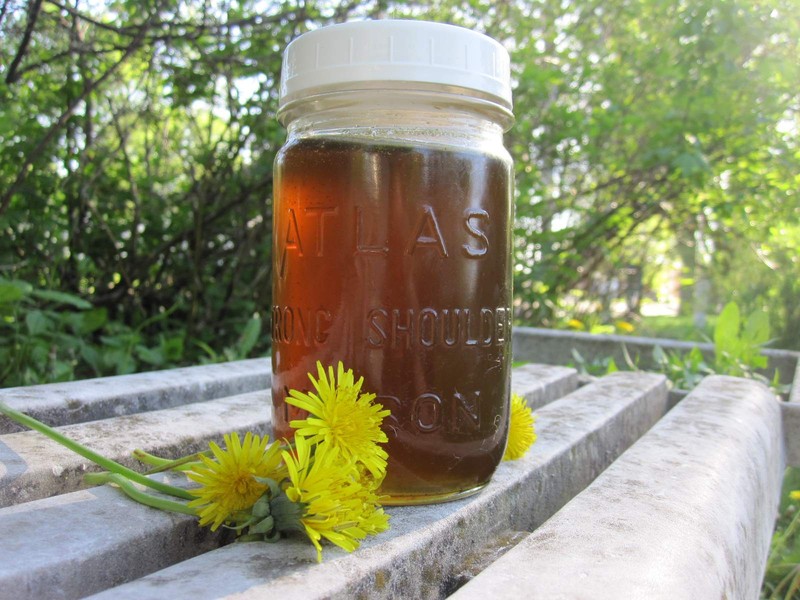 Here’s a fun way to make use of all the dandelions in your yard (or any unsprayed area) — make dandelion syrup! This recipe is not only fun and easy, but tastes delicious.

Your children will have great fun collecting the dandelions, helping to make the syrup, and eating it!

Head out to an area with a lot of dandelions where you know they haven’t been sprayed with pesticides. Avoid high-traffic areas or polluted areas. Pick as many flowers as you want (we had perhaps 300 blossoms). Don’t worry too much about the amount — it’s very flexible. You don’t need the stems, but they can be removed later.

Use your fingers or kitchen shears to remove the yellow petals from the flower. I cut them off at the “receptacle”, which holds all the petals together. I ended up with a few green sepals mixed in, but that’s okay.

Put the petals in a bowl

This is what your petals should look like after they’re removed from the flower. A few green parts (sepals) are okay.

The amount you end up with doesn’t matter too much – the recipe adjusts to the amount of petals you have.

Put the petals in a cooking kettle and cover with water. The petals will float, so use your judgement. Put it on the stove and bring it to a rapid boil, stirring constantly. Let it boil it for 5 minutes, then put it in a crock or other container.

Cover the crock with a lid or other cover to keep out contaminants. You should let it sit at least overnight to let the full flavor of the petals infuse the liquid.

The next morning, pour the liquid through a fine strainer. Press out the petals to remove all liquid. Measure the amount of liquid you have (we ended up with 4 cups).

You can make the syrup now, or put it in the refrigerator for a day or two.

When you’re ready to make the syrup, pour the liquid into a cooking kettle with an equal amount of sugar (we had 4 cups of liquid, so needed 4 cups of sugar). We also added one cut-up organic lemon (peel and all) and a generous pinch of ground cloves. If your lemon isn’t organic, make sure you wash it thoroughly.

Bring the mixture to a vigorous boil, stirring contantly. Reduce the heat and let it boil for an additional hour to hour and a half, stirring occasionally, until it thickens to a syrup. Remove it from the heat.

Pour the mixture through a strainer into mason jars or syrup bottles. Cap it, and you’re ready to enjoy!

We ended up with nearly 4 cups of delicious dandelion syrup. The syrup is good on pancakes, waffles, or as a honey substitute in sandwiches. The flavor is similar to honey, but with a unique taste you’ll love.

Store in the refrigerator. It should last for several weeks, but I don’t know for sure since this is the first time we’ve tried it. It won’t be the last, though!

About two weeks ago, I made dandelion syrup for the first 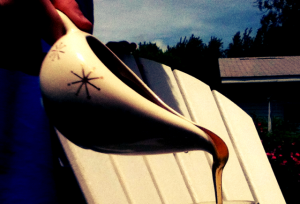 time and it tasted so good that I had to share it. It was almost like a clover honey. After aging, though, it has a different flavor. It’s now deeper, a bit reminiscent of maple syrup. Since then I’ve learned more about the process, so with foraging bags in hand my troops and I went out to pick more dandelions so we could make a second batch.

The basic steps involved in making dandelion syrup are:

Remember – only pick flowers from fields or lawns that haven’t been sprayed. Avoid flowers with brown or damaged petals, and brush or blow away any insects on the flowers. You should always pick on a dry day, when the flowers are fully opened and all dew has evaporated.

How many in a cup?

We ended up picking about 4 cups of flower heads, which turned out to be 185 flowers. It only took about 10 minutes with 3 kids helping (including Fiona, my 20 month old). It would have gone quicker but the dandelions aren’t as widespread as they were earlier in the season.

Be sure to process the flower heads as soon after picking as you can, or they’ll close up again. You can still remove the petals just like the open flowers, but any insects on the blossoms may be trapped inside.

Last time I used scissors to remove the petals from the flower head, but decided to try twisting them out instead for this batch. It took longer, and to be honest I think I ended up with almost as many of the green sepals in the bowl as I did when using scissors. It was easier to pick the sepals back out, though, since they were larger pieces.

How many petals to a cup?

It turns out that the petals from 100 blossoms equals about 1 1/2 cups, so one cup is about 66 flowers’ worth. For the entire batch of dandelions, we ended up with 2 2/3 cups of petals.

To be a little more precise in our recipe, we added about the same amount of water as petals. We added 3 cups of water (just to be sure it was covered), which was just about perfect, and put it on to boil for 5 minutes.

We ended up with 2 1/3 cups of liquid after straining it and pressing the liquid out of the “pulp”. I used a spoon to mash it against the side of the strainer to remove as much liquid as I could, but it didn’t work as well as I expected so I just washed my hands and squeezed it. I ended up with at least another 1/4 cup of liquid.

Cooking the syrup down

We mixed the liquid with an equal amount of sugar (2 1/3 cups) and put it on the stove, bringing it to a boil and then letting it simmer for about an hour and a half. We also added one cut-up organic lemon and a pinch of ground cloves.

After cooking it down, we strained it into a jar and ended up with nearly 2 cups of dandelion syrup. It had a “darker” taste than the first batch, possibly because I used too many cloves. I may just leave them out of the next batch.

2 thoughts on “How to Make Dandelion Syrup”