Homeschool 101: What about socialization? 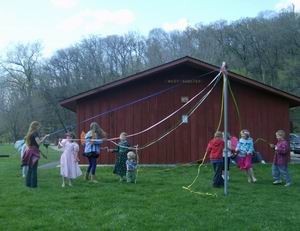 Socialization is one of those issues that only people who don’t homeschool and don’t know any homeschoolers worries about.  It’s also the most common and most annoying concern that homeschoolers hear from friends, relatives, and random store clerks.

In psychology, socialization is the process by which children and others adopt the behavior patterns of the culture that surrounds them.

Apparently, the people who believe that children need to learn socialization in schools believe that children should learn how to act from a room full of people their age instead of from family members, community members and friends of all different ages.  I have never seen the logic in this.

The Free Dictionary, defines “socialize” as:

1. To place under government or group ownership or control.
2. To make fit for companionship with others; make sociable.
3. To convert or adapt to the needs of society.

That first one may be very true in state-run schools, but I’m not sure anybody would argue that children need to be owned or controlled by the government.

The second definition makes sense, but how many people believe that schools are needed to make children fit for the company of others?  School is a relatively new invention in society.  Would anybody claim that our nation’s forefathers had no social skills because most of them were educated at home?  It’s ridiculous to claim that a six-year-old can only learn how to function in society by being around a whole lot of other six-year-olds.

The third definition hints at one reason that state-run schools do help society.  The atmosphere in most schools outside of the home is similar to some other institutions in society such as the military and factories.  Children are taught to line up and do as told, to know their place, to keep quiet and bow to authority.  These traits do help the government, but they do not necessarily help children.

This type of socialization also prepares children for life in another government institution — prison.

Incidentally, people can also thrive in institutions without being raised in them.  While I don’t know of any homeschoolers who ended up in prison, I know of quite a few who are flourishing in the military.

Here are some wonderful articles that answer the socialization question once and for all.

No Thank You, We Don’t Believe in Socialization!  by Lisa Russell

Your Cable Company announces that anyone wishing to watch the Superbowl this year must log on a certain number of hours watching the Discovery Channel before they can be permitted to watch the game.

You’re sitting at a booth waiting for a coworker to arrive for a scheduled lunch date. Suddenly a member of upper management sits down across from you and demands your credit cards. When your friend arrives, you just order water and claim you’re not hungry, since he stole your lunch money.

You’re taking your parents out for an anniversary dinner. After you find a table, a waiter tells you that seniors have a separate dining room, lest they “corrupt” the younger members of society…

This article was one of the most inspirational pieces I read when I was starting out as a homeschooler, and was one reason we decided to keep our children home and give it a try.  Russell’s examples of school socialization in the real world show how arbitrary and artificial the social environment is in schools.  Her story of the children at the art museum also showed me the sort of life I wanted for my kids instead.  We have had many similar experiences out in the real world and those time of authentic socialization have been priceless.  This article is a must read!

What About Socialization? by LLM

Minnesota homeschool mom Gretchen passed this article on and it is another piece that challenges the way we think of socialization.  Pointing out that the best socialization takes place in loving, healthy relationships and that too much toxic socialization is in schools, the author also talks about the artificial way of life children must adopt in schools outside the home:

They learn many bizarre rules of conduct that have nothing to do with the outside world- they must unquestioningly bow to authority, sit quietly and submissively, literally jump at the sound of a bell, must not speak unless allowed to do so, and ask permission to use the bathroom. They are not trusted in school- with coercive, forced learning, and the assumption that were it not for school, kids would just “goof off”, children are made to believe that school is an institution that saves them from their own apathy, ignorance, and laziness.

The Homeschool Scholar offers this encouraging story where two homeschoolers were given scholarships at a university based on their socialization.

And, of course, homeschoolers are socialized every day by being members of their families and communities.

The truth is, homeschooling is the best source of socialization that I know of.

This site is an affiliate for Amazon.com.  Purchases made through this link will earn us a small commission, at no extra charge to you.  Thanks for your support!

You may have heard the news that two little girls were found safe after surviving 44 hours in rural Northern California wilderness this...

Review: A Year of Forest School

Forest schools and other outdoor learning environments are becoming increasingly popular, not just in the United Kingdom but in the U.S....

Not a fan of homeschooling? Why you should keep it to yourself

Note:  This article originally appeared in my homeschooling column at examiner.com in 2010. Recently, Minnesota science...

Easy homeschooling on the road

Our family just got back from a week out of state. We didn't bring piles of textbooks or worksheets, but all five...