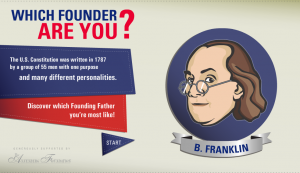 Here’s a fun way to help your kids learn more about the Constitution and our Founding Fathers.

The National Constitution Center offers this fun quiz: Which Founder are You?

The U.S. Constitution was written in 1787 by a group of 55 men with one purpose and many different personalities.

The quiz asks participants questions about their likes and personalities, and offers up various fictional scenarios where kids can select which option they’d probably choose. For instance, if they were in a group of friends trying to decide where to go for dinner, would they argue for their favorite restaurant, offer to go to the restaurant that the majority chose, give up and go home, and so on.

I personally got James Madison. The quiz said that he and I were “Diligent, Scholarly, and Shy.” Then it told me a bit about Madison:

Madison earned the title, ‘Father of the Constitution’ for his thorough preparation and influential role at the Constitutional Convention. He co-authored the Federalist Papers to explain and defend the Constitution. The essays are considered a masterpiece of political theory to this day.

It also provided a link here to learn more about Madison and the other Founding Fathers.

The National Constitution Center describes itself as:

The National Constitution Center is the Museum of We the People, America’s Town Hall, and a civic education headquarters dedicated to non-partisan constitutional education and debate.

The rest of the site offers lots of great resources to help teach about the Constitution and American History. See their educational resources section, including these recommended resources.

This is a great way to help kids feel connected to the Constitution and our Founding Fathers. They could even go back and answer all different ways (who would they get if they answered with what they viewed as the worst answers?) to learn about the different histories and personalities of the men who helped shape our country.