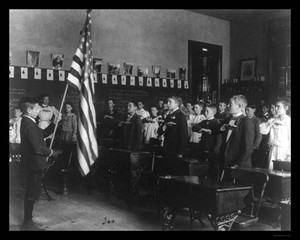 Happy Flag Day!  Here’s an assortment of easy crafts and interesting facts to share with the kids today…

Here’s a cool little Flag Day poster from 1917 to print out. There’s a little math in there for the kids too, figuring out how many years have passed since the first one and since the poster.

Here’s a fun Flag Day craft from The Holiday Spot:

Suppose you were given the exact directions given to Betsy Ross for making the first flag:

It was resolved that the flag of the thirteen United States be thirteen stripes of alternate red and white; that the Union be thirteen stars, white in a blue field, representing a new constellation.

Within these guidelines, you are free to design the flag as you wish.

Here’s our original Pledge of Allegiance:

I Pledge Allegiance to my Flag and the Republic for which it stands, one nation indivisible with liberty and justice for all.

I pledge allegiance to the Flag of the United States of America, and to the Republic for which it stands, one Nation under God, indivisible, with liberty and justice for all.

Here’s info on how you can purchase a flag that was flown over the capitol.

Here’s information from the Minnesota Department of Veteran Affairs about when to display the flag and what holidays require the flag to be flown at half mast until noon or sunset.

And finally, here are some printables like coloring pages and crossword puzzles for Flag Day.